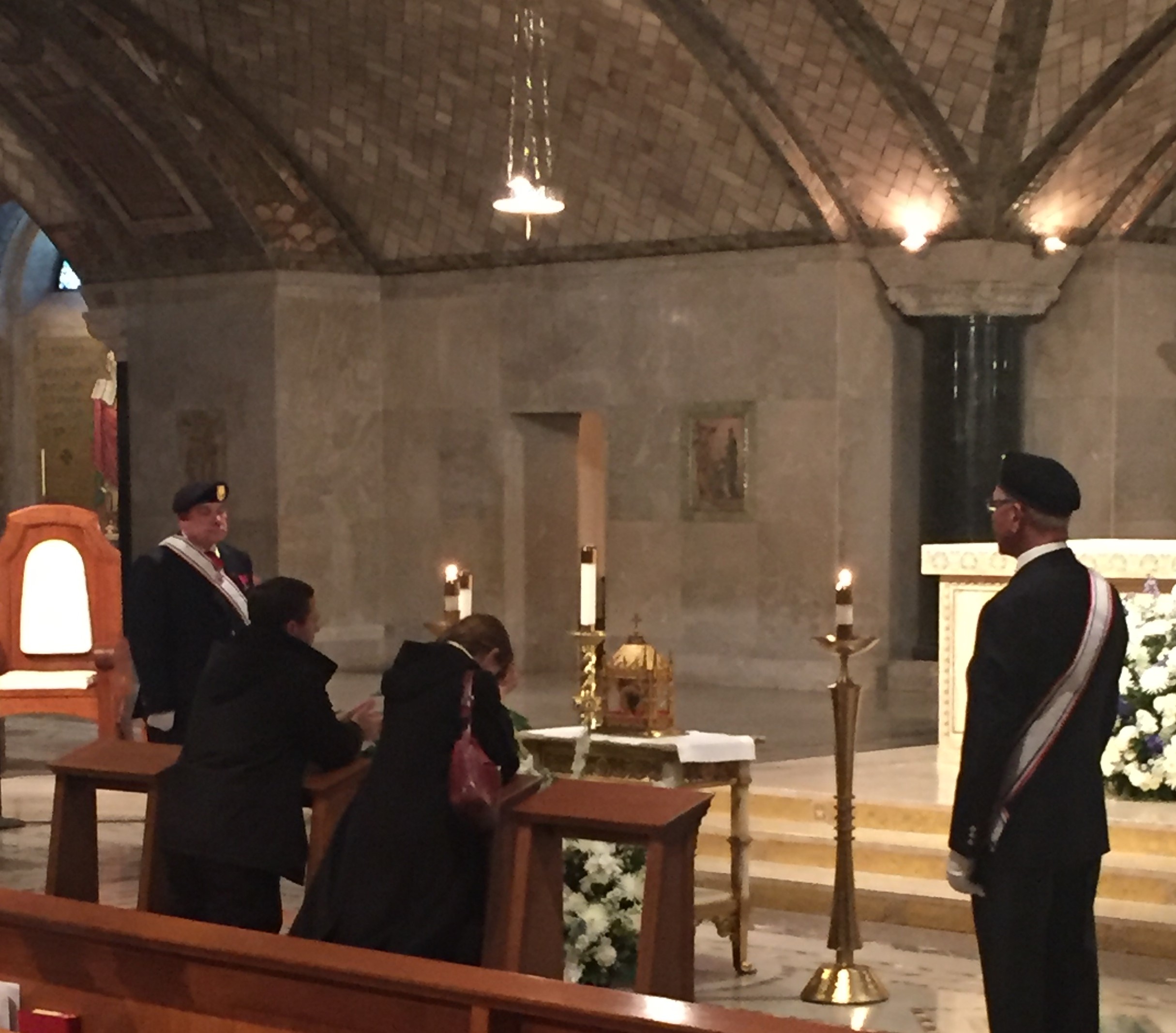 The 12 Color Corps members (10 from AWD; 2 from Maryland District) who participated in the Mass and Veneration for the Incorruptible Heart of St. Jean Marie Vianney were privileged to be a part of two great and moving events! For the

We were all in awe of this magnificent relic! I thank the Color Corps members present with me today!

I encourage all Color Corps, Non Color Corps, Knights of Columbus and their families to get to the veneration sessions if possible. There are 2 more days, 9 AM to 5 PM to experience this impactful event! This is an opportunity of a lifetime, and I hope that you can make it either to help out as Honor Guard during the veneration, or just to go to the veneration and see this magnificent relic!

Archbishop Michael J. Curley Assembly No. 383 of the Knights of Columbus Patriotic Degree has raised $10,083.49 for the Archdiocese of the Military Services, USA’s (AMS), Military Chaplain’s Scholarship Fund. The Assembly, comprised of Knights from nine Councils in Eastern Montgomery and Northern Prince George’s counties, raised the money through its “Pass the Helmet” Campaign, which started on October 9, 2016, and concluded on June 4, 2017. 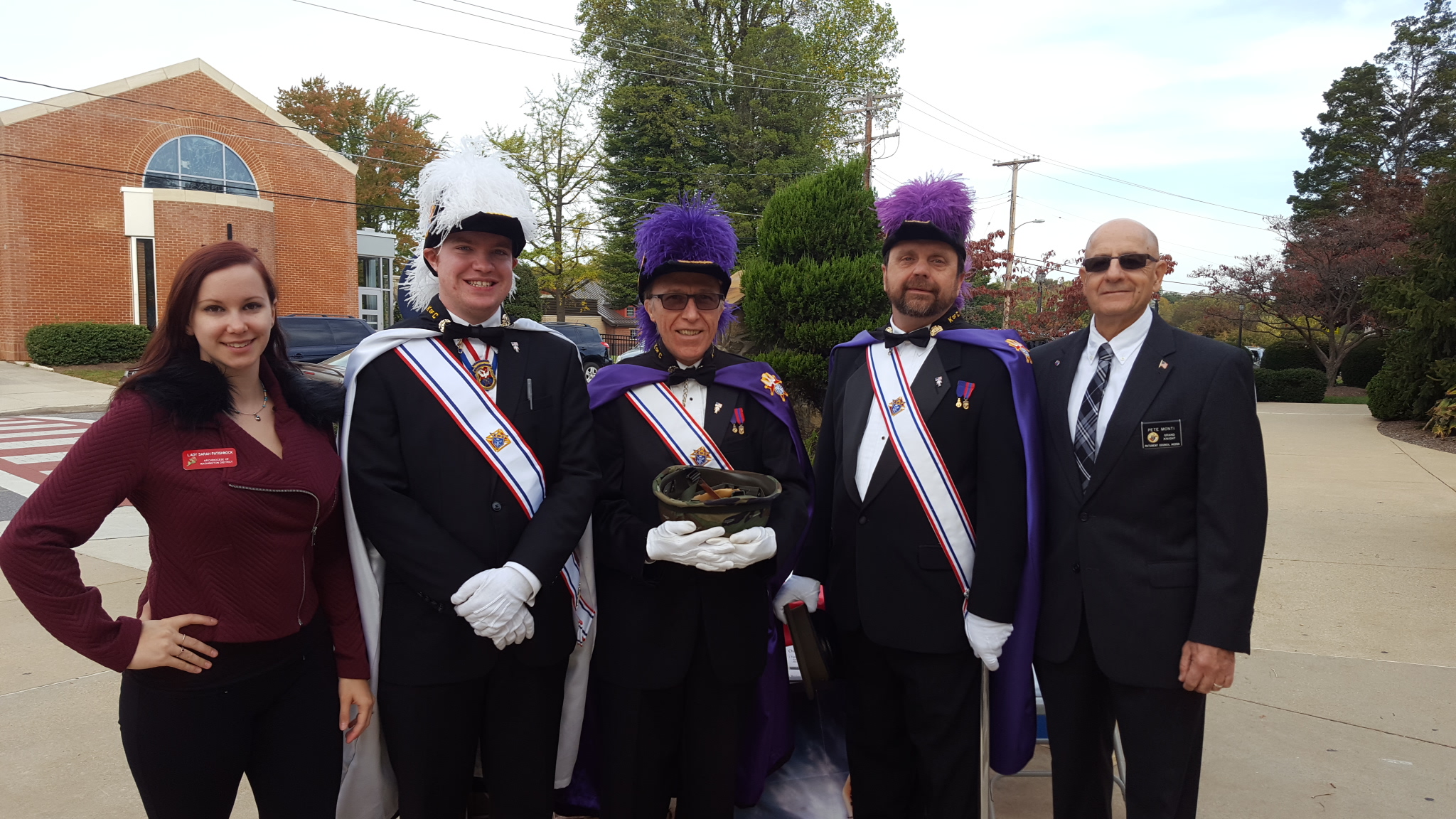 Lady Sarah Patishnock and Sir Knights Jimmy Williams, Arnie Rausch, Dave Knitowski and Pete Monti (left to right) collected donations following the 9 a.m. Mass at St. Mary of the Mills in Laurel, Md. on Sunday, October 30, 2016.Faced with a critical shortage of priests serving the Catholic men and women of the United States military, AMS and the Knights of Columbus established the Military Chaplain’s Scholarship Fund in an effort to increase the number of Catholic military chaplains. The Knights of Columbus committed to raising $1.4 million for the Fund by June 30, 2017. The funds will be used to provide scholarships through AMS’ “Co-Sponsored Seminarian Program,” which funds 50 percent of the cost of a seminarian’s five-year education, or about $12,500 per year, for seminarians who commit to serving as military chaplains following their ordinations and three years of service at a parish.

“This was just a truly amazing effort, from the Sir Knights and Ladies who gave more than 125 hours of their time to make this campaign possible to the incredible generosity of those who donated,” said Sir Knight Jimmy Williams, Faithful Navigator of Curley Assembly. “When we started out, we had no idea this campaign would be so successful. We just wanted to support our seminarians and Catholic men and women in uniform and knew whatever amount of money we raised would make a difference. The end result blew us all away.” 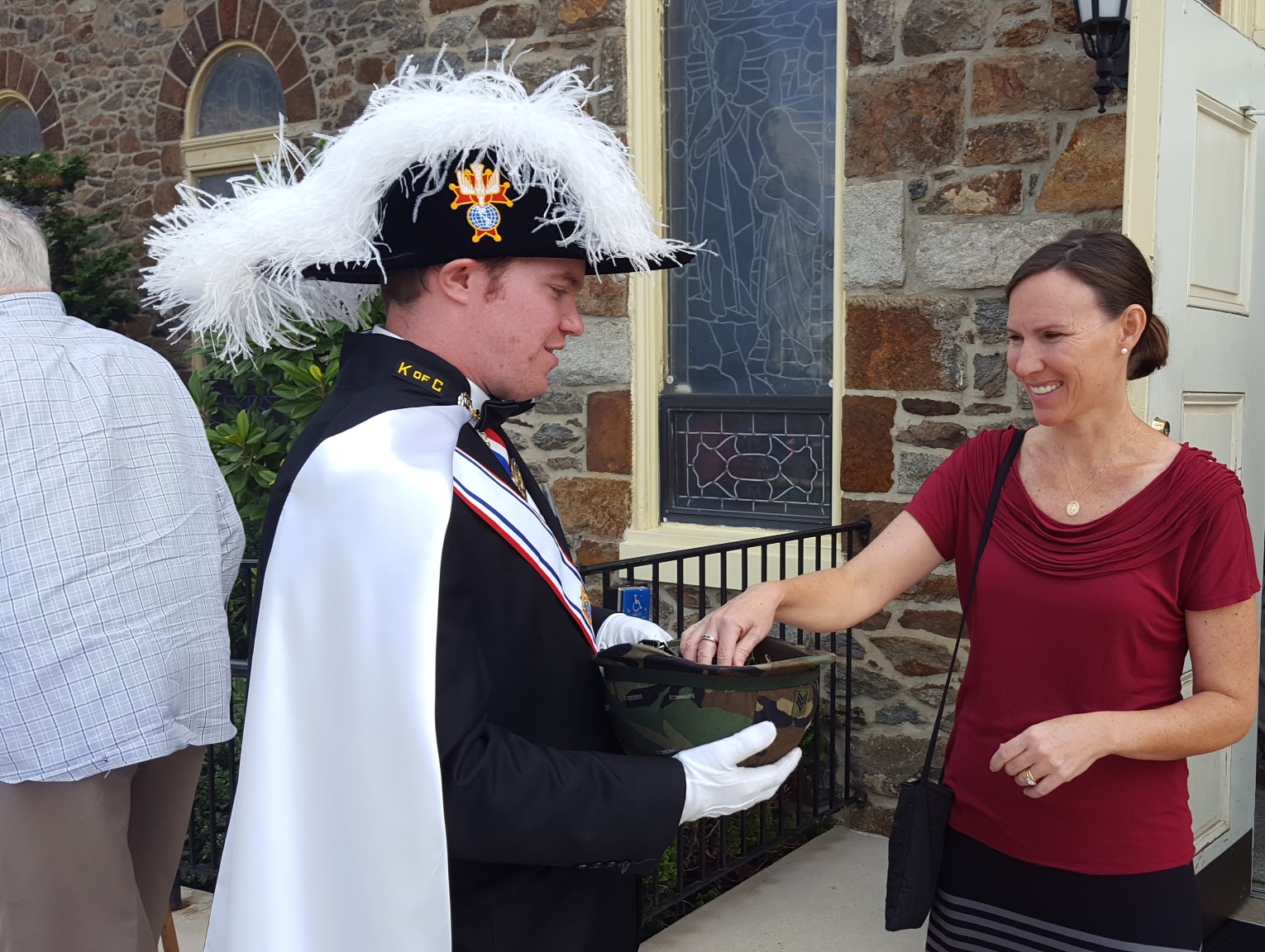 Sir Knight Jimmy Williams, Faithful Navigator of Curley Assembly, receives a donation from a parishioner after Mass at St. Mary of the Mills in Laurel, Md., on Sunday, October 30, 2016.Throughout the campaign, the Assembly coordinated collections after Masses at five of the parishes it supports. To promote the collections, the Assembly ran bulletin announcements and made announcements about the collection during Mass. A feeder Council contributed to the effort through a collection during one of its meetings and the seniors club at another feeder Council also contributed. 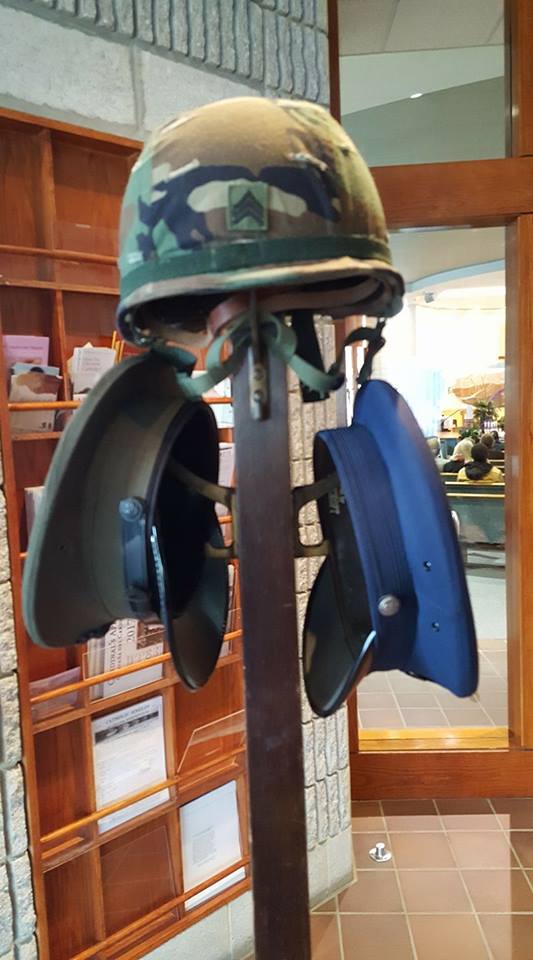 An Army helmet, Air Force cover and Marine cover on display during Curley Assembly's Pass the Helmet Campaign visit to Church of the Resurrection in Burtonsville, Md. on Sunday, March 12, 2017. The Assembly used the helmet and covers to collect donations from parishioners as they exited Mass.“The Fourth Degree of the Knights of Columbus, known as the Patriotic Degree, strives to perform activities that exemplify the virtue of Patriotism. Curley Assembly has done just that through their ‘Pass the Helmet’ Campaign,” said Sir Knight Micheal Thumm, Master of the Archdiocese of Washington District of the Patriotic Degree. “It is my opinion that through their actions in this campaign, they have also demonstrated the other virtues of a complete Knight of Columbus: Charity, United and Fraternity. It is a fantastic deed that the Sir Knights of this Assembly have accomplished!”

According to information received from Sir Knight Dennis Stoddard, Supreme Master of the Patriotic Degree, as of February 2017, AMS had just 210 active duty priests serving. It is estimated 800 are needed to fully serve all Catholics in the United States armed forces. As of June 2017, seven priests have been ordained through the AMS program, with another 35 seminarians enrolled. While there is still a long way to go to adequately serve all Catholics in the military, the funds raised for the Military Chaplain’s Scholarship Fund are making a difference.

AWD At Wreaths Across America 2014

The plan for the Archdiocese of Washington District (AWD) of the Fourth Degree for Wreaths Across America at Arlington National Cemetery was to meet across from the Visitor's Center at the 101st Airborne Division Memorial on the right side of Memorial Drive (as you walk or drive towards the Cemetery), the road leading into the Cemetery, at 0830.  The memorial consists of a bronze eagle, representing the units "Screaming Eagles" nickname, perched atop a granite stone.  Once we get together at 0830, we'll move to the area of the opening ceremony, a gravesite, or wreath truck.  This is a great event for families and friends and a recruiting opportunity.
Due to the amazingly large turnout for the event, many of us were delayed in traffic or at metro stations. So, some met at the 101st Airborne Division Memorial, and others were on their own and went out into the cemetery for the opening ceremony and to the trucks to get wreaths to place.

Once again I must remind you not to call the Supreme Master’s Office about the patch for your New Uniform Beret.  The Supreme Master’s Office does not handle that (although the e-mail used for it, makes you think so!).  In the past few weeks, that office has been receiving an extreme number of calls about how to get the patch, and asking questions about the uniform.  You all use the chain of command well, so I do not believe that we are doing this.

To order the colored patch, send an e-mail to This email address is being protected from spambots. You need JavaScript enabled to view it.  providing your name, address, officer role, color of patch, and membership number.  Please do not e-mail the Supreme Master’s personal e-mail account for this purpose. For a run-down of the patch colors and officer roles that are afforded a patch, please read this article.

Questions regarding the new uniform such as to place an order, change sizes, status on orders, etc., may be placed at 1-833-562-4327 or 833-kocgear, or e-mail This email address is being protected from spambots. You need JavaScript enabled to view it.

Patriotic Service to Church and State: Join the Color Corps

Over the past two weeks the Archdiocese of Washington District Fourth Degree Color Corps has  participated in a great number of events honoring our Church, our Country, and our Order. We had the privileged to assist with the sending home of two Sir Knights at Arlington National Cemetery; we participated in a Chalice Mass at the DC VA Medical Center, honoring those who have served our nation in uniform.  We participated in the District of Columbia and the Maryland State Officers Installations, praying for the future success of the Order. We participated in the Episcopal Ordination of the Most Rev. Michael W. Fisher as Auxiliary Bishop of Washington. And soon we will be honoring our Order and Church in Baltimore for the 136th Supreme Convention. 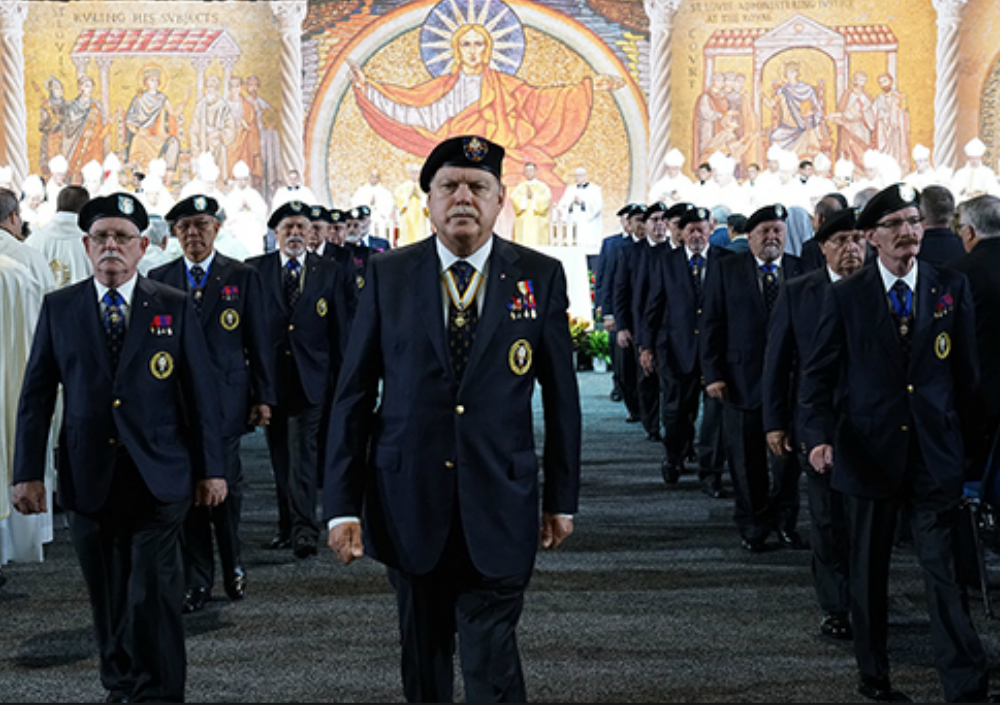 These Color Corps events and many others are all outstanding, and provide a definite feeling of self-fulfillment, as we operate as the visible arm of the Knights of Columbus and add dignity to every event in which we participate!  I encourage each Sir Knight in the Archdiocese of Washington District, to consider joining the Color Corps and then join us in these outstanding events!

If you would like to become a member of the Color Corps in your Assembly, please contact your Color Corps Commander or This email address is being protected from spambots. You need JavaScript enabled to view it..

Recently some of you have told me that you have contacted Knights Gear about the New Uniform, and you were told that they no longer handle the new uniform.  It appears that this is true, and that a company named Waterfront, located in Connecticut, will be handling the orders and distribution.  We have been told that the Contact phone number is 833-562-4327 and the email address is This email address is being protected from spambots. You need JavaScript enabled to view it. or by visiting https://kofcuniform.com.  The uniform is listed at the same price and at least for the limited future, Knights Gear is still taking pre-orders. I recommend that if you have a uniform question, that you contact Knights Gear and let them refer you to the new company handling the new uniform.

The new company did tell me that they are in the process of shipping out 4,000 uniforms, so many who have ordered should see them very soon.  I have had a pre-order in since October 27, 2017, and I was told that I will soon be asked to pay for the uniform, which means they are getting close to manufacturing it!